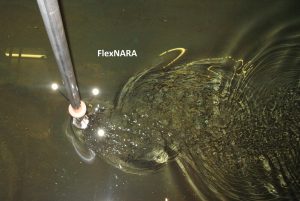 Vortices generated when flows past cylinder

In the past decade, FlexNARA has been developing computationally efficient models and analysis tools which have been used to examine a variety of VIV phenomena associated with combined hydrodynamics and structural geometric nonlinearities, see our publications. We have developed an experimental framework as below and combined analytical-numerical approaches to deal with several VIV problems.