Structural Distortion in Hydrocarbons on Coordination to Copper and Silver Chloride

Copper, silver and gold are used industrially as catalysts for the hydrogenation of ethyne into ethene. Our experiments have recently probed how the geometry of ethyne changes on attachment to CuCl and AgCl. Our experiments show that the bond length separating the carbon atoms within ethyne increases and this is accompanied by a significant change in the CCH angle (see molecular geometry below) with respect to the linear geometry of isolated ethyne. On attaching to AgCl, the CCH angle increases by 8 degrees and when attaching to CuCl, it increases by 12 degrees. Beyond precisely quantifying the structural rearrangements occurring in these complexes, these experiments provide insight into the chemical re-arrangement that accompanies the adsorption of hydrocarbons onto metal catalyst surfaces. 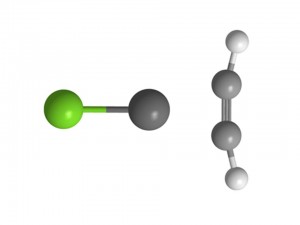 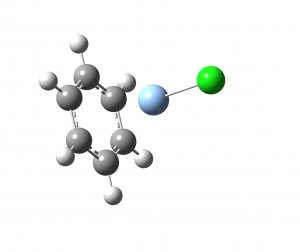 Networks of halogen bonds between perfluoroiodoalkane building blocks have been shown to enhance the structural stability of novel crystalline substances characterised in the condensed phase. The resulting materials have promising applications and properties determined by the strength and nature of their contained halogen bonds. Trifluoroiodomethane is the simplest example of a perfluoroiodoalkane.

We have examined the geometry and stiffness (as represented by the force constant) of the intermolecular bond formed between CF3I and a range of small molecules. Amongst the strongest interactions of those examined are the interactions with ammonia (NH3) and trimethylamine (N(CH3)3). Like ammonia, trimethylamine has C3v symmetry and coordinates to CF3I via a halogen bond formed between the nitrogen and iodine atoms. However, trimethylamine forms a bond that is somewhat shorter and stiffer than that existing between NH3 and CF3I. Trimethylamine is geometrically similar to NH3– the basic C3v geometry of NH3 is also present in (N(CH3)3) but the hydrogen atoms are replaced by CH3 groups. The electron-donating properties of these methyl groups give trimethylamine slightly higher nucleophilicity than NH3, leading to the stronger interaction.

Above: The geometry of CF3I-NH3

Link to other publications