Plasma is the state of matter found abundantly in stars. It is the result of transient, intermittent events such as lightning strikes or meteor impacts in the terrestrial environment and is thus often regarded as an ‘‘exotic’’ state. Commercially, the production of materials by chemical vapour deposition is assisted by plasma chemistry.

Our experiments study the plasma generated when a focussed laser pulse is used to vaporise material from the surface of a metal target. Immediately following the laser pulse, the plasma consists of a mixture of high-energy electrons, atoms and molecules. What chemical products are preferentially formed given that many competing reaction pathways exist? 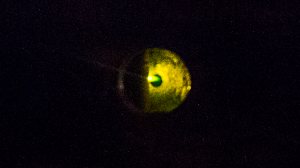 Plasma generated by vaporisation of metal by the focussed laser pulse is visible as the green spot at the centre of this image. Taken through a viewport on our spectrometer.

Broadband rotational spectroscopy allows many different reaction products to be detected simultaneously. We discovered that vaporisation of silver in the presence of a gas sample containing C2H2, SF6 and argon results in the formation of C2H2-AgCCH. Some C2H2 breaks up within the plasma to allow the formation of AgCCH which can subsequently attach to an intact C2H2 molecule. A second study revealed that AgCCCl, a molecule which is geometrically similar to ethyne but where the two hydrogen atoms have been replaced by silver and chlorine respectively, forms in plasma from products of the fragmentation of CCl4 and the vaporisation of silver metal. 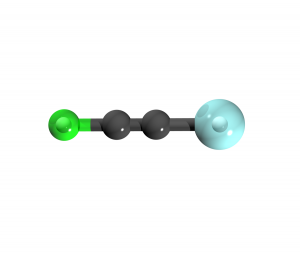 Like ethyne, AgCCCl is a linear molecule containing two carbon atoms connected by a triple bond.

This work is more completely described in the articles linked below. The first of these is available on an “open access” license.

Link to other publications