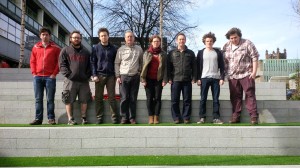 Dror Bittner
Dror completed his undergraduate B.Sc degree at Newcastle University in June, 2013 and commenced a PhD in the group in October of the same year. Dror’s published works have thus far examined the nature of interactions between NH3 and metal halides and the gas phase chemistry of palladium and platinum.

Anthony Legon
Tony read for the BSc (Special) degree in Chemistry at UCL and conducted his doctoral research there with D. James Millen, with whom he subsequently had a long and happy collaboration. His association with UCL continued as Turner and Newall Fellow (1968–70), Lecturer (1970–83), Reader (1983–4) and Thomas Graham Professor (1989–90) in its Chemistry Department. He was also Professor of Physical Chemistry at the Universities of Exeter (1984–89 and 1990-2005) and Bristol (2005–2008). He has been Tilden Lecturer of the RSC (1989–1990), EPSRC Senior Fellow (1997–2002), was elected a Fellow of the Royal Society in 2000 and is currently Senior Research Fellow at Bristol. Tony holds the position of Visiting Professor at Newcastle University. He received the significant distinction of the 2012 Liversidge Award of the Royal Society of Chemistry for his innovative studies of non-covalent interactions of closed shell molecules involving hydrogen, halogen or metal bonds.

Chris Medcraft
Chris completed a PhD with Prof. Don McNaughton (Monash University), Dr. Evan Robertson (LaTrobe University) and Dr. Dominique Appadoo (Australian Synchotron) applying infrared spectroscopy to the study of small molecules and aerosols. He then completed a postdoctoral research position with Dr. Melanie Schnell at the Max Planck Institute for the Structure and Dynamics of Matter at the Centre for Free-Electron Laser Science, Hamburg. While in Hamburg, Chris explored the application of broadband rotational spectroscopy to the separation and quantitative analysis of chiral isomers. Chris joined the Newcastle group in November, 2015.

John Mullaney
John completed his undergraduate B.Sc degree at Newcastle University in June, 2014 and commenced a PhD in October of the same year.

Nick Walker
Nick pursued undergraduate and postgraduate degrees at the University of Sussex and completed a D.Phil under the guidance of Anthony J. Stace in 1999. He held postdoctoral appointments in Canada (with Michael C.L. Gerry, UBC) and the United States (with Michael A. Duncan, Uni. of Georgia) before moving to the University of Bristol to perform independent research whilst funded by a Royal Society University Research Fellowship in 2003. He moved to Newcastle University for a lectureship in Physical Chemistry in March 2012 and received a European Research Council Starting Investigator Award in November of the same year.

Dan Zaleski
Dan completed his B.S. in Chemistry at Syracuse University in 2008. His undergraduate research was under the supervision of Dr Timothy Korter and focused on solid state Terahertz vibrational spectroscopy and solid state computational chemistry. He completed his PhD in Chemistry at the University of Virginia in 2013 under the guidance of Dr Brooks Pate. Dan moved to Newcastle in August 2013 and received one of the SAgE faculty research fellowship awards in 2014. Dan’s work in Newcastle was featured in ten published papers and spanned studies of interactions significant from inorganic chemistry to biochemistry. Dan moved to a postdoctoral research position with Dr. Kirill Prozument at Argonne National Laboratory in October, 2015.