One aim of our experiments is the study of interactions of fundamental importance in both inorganic chemistry and in biochemistry. Microwave spectra can only be obtained for gas phase molecules and this presents us with our first experimental challenge. How can we generate gas phase molecules that contain metal atoms when metals are usually solids at ambient temperature and pressure?  Answer: we use a laser to vaporise a small amount of material from the surface of a metal target and allow it to mix with other components of a chemical sample.

While passing through the plume of material vaporised by the laser pulse, the chemicals present within our sample may become hot and undergo fragmentation. In fact, we often rely on this process to generate molecules of interest. For example, H2O-AgCl was generated from a sample containing CCl4 (carbon tetrachloride) and H2O mixed with silver vaporised from a solid metal target by a laser. Immediately after passing through the plume, the gaseous sample cools rapidly during expansion into an evacuated chamber. Transient molecules and complexes form in the cold expanding gas and survive only for a few milliseconds which is long enough for their spectra to be measured by Fourier transform microwave spectroscopy. 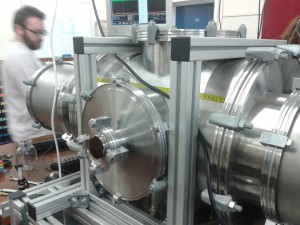 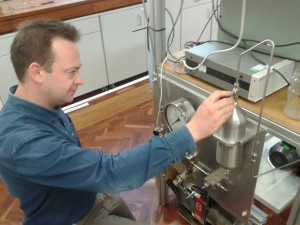 The method of Fourier transform microwave spectroscopy (FT-MW) is analogous to the more widely-known technique of Fourier transform nuclear magnetic resonance (FT-NMR) spectroscopy. Initially, a pulse of microwave radiation is introduced. Where the frequency of this pulse is resonant with rotational transitions of molecules within the prepared sample, a tiny fraction of the introduced radiation is absorbed. This absorbed radiation populates excited rotational states and causes a coherent polarisation of the sample that survives for a fraction of a second (specifically, about 20 microseconds). The molecular emission that accompanies the free induction decay (FID) of this polarisation is detected using microwave electronic components, then digitised and recorded using an oscilloscope. Fourier transformation allows the “intensity against time” FID to be converted into a plot of intensity against frequency. The process is repeated and the results are averaged to improve the signal/noise ratio of recorded spectra.

Researchers have been using FT-MW spectrometers to record microwave spectra ever since electronics became fast enough to allow the digital recording of spectra. T.J. Balle and W.H. Flygare pioneered the technique and designed a model of spectrometer that became widely used over the next 30 years. Heterodyne mixing allowed frequencies of many gigahertz to be accurately measured. The Balle-Flygare spectrometer continues to provide the highest resolution of modern instruments and this can be important when distinguishing details in rotational spectra. A Balle-Flygare spectrometer, originally constructed by Prof. A.C. Legon while at the University of Exeter, continues to be used for experiments at Newcastle University. 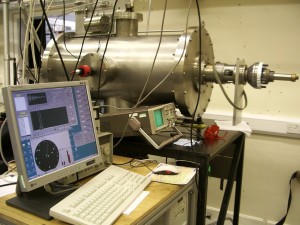 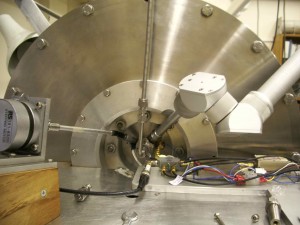 The earliest spectrometer designs, including the Balle-Flygare FTMW spectrometer, were constrained to use slow (by modern standards!) digitisers such that the bandwidth of recorded spectra was restricted to about 1 MHz during any single measurement. Technological advances in the telecommunications industry have since provided much faster digitisers that have allowed the construction of broadband microwave spectrometers. The first of the modern broadband instruments was constructed by Prof. Brooks Pate at the University of Virginia in 2006. The Newcastle spectrometer was constructed by Susanna Stephens and Nick Walker at the University of Bristol in 2010, then moved to Newcastle in 2012.

The sequence in which a microwave polarisation pulse is introduced before the FID is recorded and Fourier transformed is retained in a CP-FTMW spectrometer. However, the introduced MW pulse and the detected FID each span a bandwidth of 12 GHz. This broader bandwidth allows spectra to be recorded in a fraction of the time that would be necessary if using one of the earlier generation of spectrometers. Hundreds of transitions can be measured simultaneously where this might have required months of work using a Balle-Flygare FTMW spectrometer. 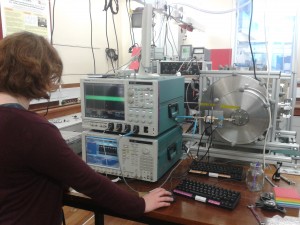 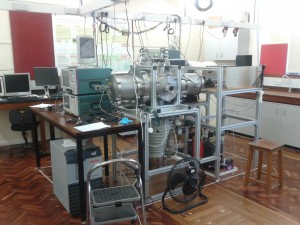